Shovel Fire Hydrants
The Fire Department asks residents to shovel out fire hydrants near their homes. Keeping hydrants clear of snow can substantially reduce the time it takes firefighters to put out a fire. More information about Adopt a Hydrant.

Inspect Mailboxes, Clear the Snow
Inspect you mailbox post each fall and replace those that are deteriorating to prevent mailboxes from being toppled by heavy snow or plowing activities.

Recycling and Garbage
If it snows on garbage or recycling collection day, keep garbage cans and recycling carts a few feet back in the driveway – out of the street. This will allow plow drivers to more thoroughly clear the street and will help prevent carts from being toppled by plowing activities. With questions about garbage collection, contact your garbage hauler. 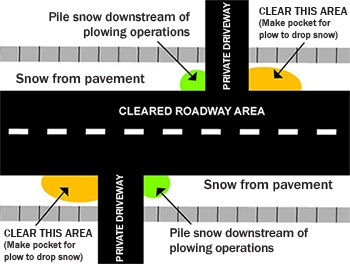 It is unlawful to shovel, plow or blow snow into the street (Plymouth City Code Section 1310.05, Subd. 5). Blowing snow in the street makes it more difficult to clear streets (especially cul-de-sacs).

After each snow storm, city plows and homeowners are out trying to clear away snow as quickly as possible. Some homeowners are frustrated when the city snow plow fills their already-cleared driveway with snow.

City staff thanks residents for their cooperation and patience during snow storms.