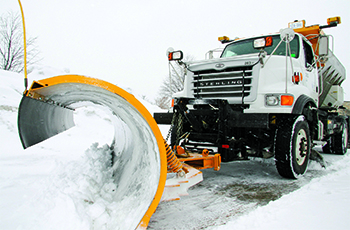 The City of Plymouth has implemented changes to its snow and ice management operations through the last couple winters to help improve service times and cul-de-sac plowing.

When a snow emergency is declared, all city streets are plowed curb-to-curb. Residents are notified via eNotify email, the city's website and social media. Sign up for Snow Emergency Alert emails.

For snowfalls of less than 2 inches, the city treats and plows main roadways. Ice control measures are taken throughout the system, and special attention is given to stop signs, hills, bridges and curves.

Parking Regulations
Parking is prohibited on city streets after a 2-inch snowfall. Parking may not resume on the street until it has been plowed curb-to-curb. Violators may be tagged and towed. In addition to parking restrictions related to snow plowing, Plymouth prohibits parking on city streets year-round from 2-5 a.m.

Route Changes for Improved Service Times
The city has adjusted routes and staffing to shave off an hour of the time it takes to complete a citywide plow. While each snow event is unique, for an average snowfall, city staff aims to have streets and cul-de-sacs cleared within nine hours after snow quits falling. (A full citywide plow previously required up to 10 hours.)

Additionally, after a citywide plow has been completed and the full plow crew goes home to rest, the city will retain a small crew to handle routine follow-up calls.

Note: It is unlawful to shovel, plow or blow snow into the street (Plymouth City Code Section 1310.05, Subd. 5). If your street has not been plowed within 9 hours after the end of a 2-inch snowfall, please contact city staff at the number listed below or complete the Report a Snow Plowing Issue through myPlymouth.

Plowing Cul-De-Sacs
Plymouth has more than 920 cul-de-sacs among its 320+ miles of streets. To improve service times, the city has increased the number of contracted plow drivers clearing cul-de-sacs by creating additional zones to ensure timeliness and requiring contractors keep equipment in each cul-de-sac zone until plowing is completed.

Because of their configuration and size, cul-de-sacs are plowed with a special piece of equipment that has a shorter turning radius than standard plows. Snow may not be divided evenly among properties on a cul-de-sac due to locations of fire hydrants, mailboxes, landscaping and driveways.