Background
In September 2015, the first case of Emerald Ash Borer was confirmed in the City of Plymouth. The small, invasive insect infects ash trees and spreads quickly, typically killing a majority of ash trees in its path.

Many Minnesota communities have seen the devastating effect of the ash borer as it spreads. The first reported case in Plymouth appeared in the southeastern part of the city, near Medicine Lake.

Emerald Ash Borer Interactive Map
Diagnosing positive EAB infestations can be tricky during the early stages of the infestation. Tracking both treated trees and removals (due to EAB) can be helpful in determining the risk associated with your private trees. The interactive map allows residents to view the status of neighboring trees while allowing you to enter your private ash trees into the inventory, thereby increasing the data base for all concerned tree owners. View the Interactive EAB Map.

While the city began prevention measures on public trees in 2012, residents and business owners with ash trees on private property are strongly encouraged to consider plans for treatment or removal.

Identifying Emerald Ash Borer
The first step is to inventory trees and determine whether or not ash trees are on the property. Learn how to identify ash trees.

While difficult to recognize in early stages, there are telltale signs that EAB has infected a tree. It’s easiest to spot signs of EAB in the fall, winter and spring, when leaf coverage is minimal. Look for bark splitting, canopy thinning and small D-shaped exit holes. Also note increased woodpecker activity around trees – woodpeckers feed on EAB and often locate a colony before the experts can.

Use the Does My Tree Have EAB? guide to help identification. To be certain of EAB status in a tree, call a private contractor.

EAB Has Been Identified in the Area: What’s Next?
Develop a Plan. Because EAB spreads so rapidly, it’s important to develop a plan of action as soon as the invasive species has been confirmed in the area. There are basically two options for property owners with ash trees – begin a course of treatment immediately, or plan for the tree to be removed. 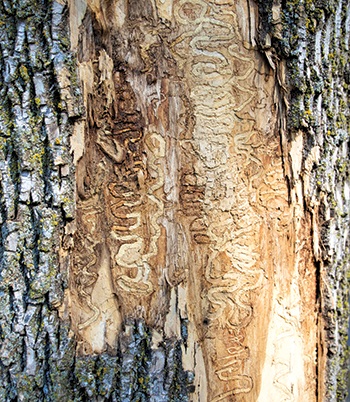 Treatment. A two-year insecticide treatment typically costs roughly $100-250, depending on the size of the tree. This treatment will likely be necessary for the rest of the tree’s life. Contact a private contractor for treatment options. Less expensive do-it-yourself treatments are also available, though they are considerably less effective. Use the Homeowner Guide to Insecticide prior to beginning treatment.

Removal. Tree removal should only occur during the inactive season for EAB (October to May). This will reduce the threat of a colony relocating.

Transporting Removed Trees. Wood from removed trees should not be transported outside the Minnesota Department of Agriculture’s quarantine area, which includes Hennepin, Ramsey and other metro counties. Observing the quarantine is crucial to stemming the spread of EAB.

If property owners would like to replace a removed tree, the City of Plymouth helps residents find low-cost options by sponsoring an annual spring tree and shrub sale.

The City’s Plan for Trees on Public Properties 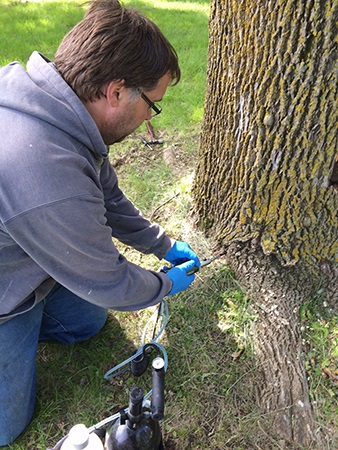 About 16 percent of trees in Plymouth are ash and in Plymouth parks, about 12 percent of trees are ash. The City of Plymouth has been preparing for the arrival of EAB since 2012. To minimize the impact of EAB on trees in parks and city boulevards, the city adopted an EAB action plan, which includes: 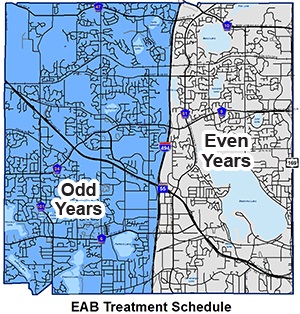