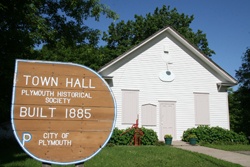 Plymouth's history can be traced back to the pre-Colombian period, 1400-1500 AD. The original inhabitants were the Dakota. Their encampment was at the north end of Medicine Lake. The name Medicine Lake is derived from the Native American word "Mdewakan", meaning "Lake of the Spirit." The Dakota named the lake after a warrior overturned his canoe and his body was never recovered.

Antoine LeCounte, a guide and explorer, was the first settler to this area. He arrived in 1848, but did not settle until 1852. He carried mail from the Red River country to points south, trading goods to Native Americans for horses on the way. LeCounte built the first cabin at what is now East Medicine Lake Boulevard at 29th Avenue North.

Plymouth’s Start as a Town
Plymouth's beginning as a town occurred in 1855 on the northwest shores of what is now known as Parkers Lake. A gristmill and other structures were built in the area. In the spring of 1857, when Parkers Lake flooded, the mill was taken down and moved to Freeport, Minnesota. Freeport is now called Wayzata.

As new settlers arrived in the area, they decided to organize. The Hennepin County Board of Commissioners named the new settlement Plymouth. On May 11, 1858, a group of townspeople met at the home of Francis Day to open elections for town offices. On June 1, 1858, the group voted to change the town's name to Medicine Lake. This was used once at the town meeting, but for reasons, which were not recorded, it was never used again.

In 1862, during the conflict between white settlers and the Dakota at Fort Ridgeley, near New Ulm, the settlers of Plymouth formed a militia. When the Civil War started, Plymouth paid its volunteers $25 to enlist. At about this time, Plymouth's growth began to take on a new look. Schools and churches were built and a post office was located in Plymouth. By 1863, hotels were being built.

More changes occurred after the Civil War. By 1880, Plymouth boasted a population of 1,074, and reaped $667 in annual taxes. Farming became the trade of most settlers. Roads were built across Plymouth, making access to other towns possible. Medicine Lake had become a major tourist attraction and resorts were built around its shores.

Our Town's Story
The Plymouth Historical Society, CCX Media and the City of Plymouth present “Our Town’s Story,” a 45-minute film featuring an in-depth look at Plymouth’s history – from its early formation to its status as Minnesota’s seventh-largest city and fourth-largest economy.

The video highlights the area’s original Native American inhabitants – the Dakota – and Plymouth’s first settlers, as well as infrastructure development, school system establishment, parkland preservation, community event origins and more. Plymouth history comes to life in the video through archival photos, storytelling and interviews with those connected to the city’s history.