If desired, choose a Category and/or Department to filter results. 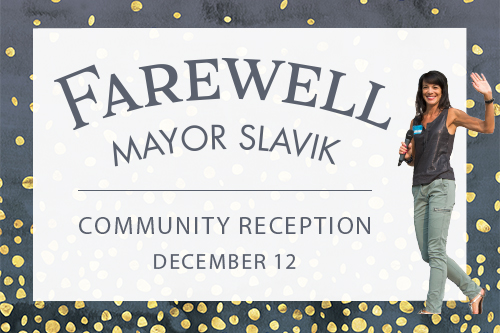 The event is free and open to the public. There is no need to RSVP.

Slavik did not run for re-election in November. The reception will pay tribute to her two decades of public service – 12 years as mayor and eight years as council member.

Slavik was first elected to the City Council in 1998 to represent Ward 2 (southwest Plymouth). After two terms as council member, she was elected mayor in 2006. Slavik was re-elected in 2010 and 2014.

During her tenure as mayor, Slavik worked with fellow council members to advocate for several transportation projects, including a permanent third lane on Interstate 494 and procurement of state funding to build a bridge on Vicksburg Lane over the Canadian Pacific Railroad tracks. She also advocated for a new bridge on County Road 9 over I-494 and the creation of the Plymouth Veterans Memorial.

In addition to regularly testifying and advocating for issues and projects affecting Plymouth at the State Capitol, Slavik regularly represented the city to the business community and promoted Plymouth as a regional employment center. She spoke to hundreds of elementary school students annually, worked with numerous community groups and represented Plymouth on the national stage when Money Magazine named Plymouth America’s Best Place to Live in 2008.